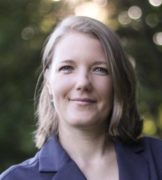 Annabelle Vinois has been working with the Geo-Enabling initiative for Monitoring and Supervision (GEMS) led by the World Bank’s Fragility, Conflict and Violence Group since 2018. The GEMS initiative aims to build the capacities of WB clients and partners to use simple ICT tools to enhance the M&E of development operations. She now co-leads the GEMS engagement in Sub-Saharan Africa and Latin America. In this capacity, she led dozens of in-person and online capacity-building workshops for government representatives and Development specialists from the World Bank and partner organizations working in Fragile States and beyond. She manages a team of field-based colleagues to provide tailored M&E and GIS support to government counterparts in low technical capacities environments. Before joining the GEMS team, Annabelle focused on building Indigenous Peoples’ organizations’ capacities in Central Africa to enhance their participation in global environmental programs such as REDD+. Before joining the World Bank, Annabelle worked as an attorney in Brussels, practicing immigration, family, and criminal law. She holds a Master of Laws and an LL.M in International Law from the University of Leuven, Belgium, as well as a Master of Science in Environmental Policy from The New School in New York City. She is fluent in English, French, Dutch, and Spanish.